A Taste of Honey by Kai Ashante Wilson is a delicious tale of the romance and love between two men in a fantasy world and time far from here. Told in multiple time frames, the story is fascinating and paced well, and the language is beautiful and poetic. I even caught myself shout-whispering some of the dialogue, sort of living the story (much to the dog’s horror), so all in all, this was a wonderful novella to fall into over three evenings. 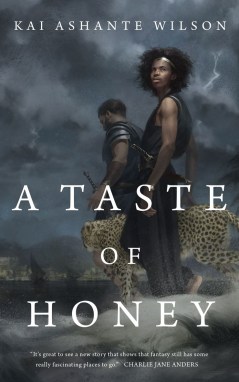 Click the image to buy this at a DRM-free bookshop (Barnes & Noble).

In essence: A Taste of Honey by Kai Ashante Wilson

Aqib is a beautiful effeminate man, just reaching full manhood, fourth cousin in a royal line, and very aware of his privileges and responsibilities. Lucrio is a soldier from a different country, one with a diplomatic tie. Lucrio is direct in his sexual and romantic approaches to Aqib, a rough diamond looking for his one true love, though he doesn’t mention that outright. Aqib, knowing homosexual activity is totally taboo in his country, is also painfully alert to the expectations placed upon him. He must marry well and bring up children. This is his responsibility. Thanks to his remarkable royal wife, he achieves this. She chooses him to marry, their child is as remarkable as she, and she doggedly follows what she believes to be her duty at all times. Aqib supports her in every decision she makes. The balance of power for men and women, certainly at Aqib’s social level, is interesting and would take another reading to unpack.

The story intertwines the ten days Aqib spent with Lucrio in his life in his home of Olorum with accounts from years later. We meet him at 34 years, 89 years, that kind of thing. The structure is a minor surprise when it first occurs, but a brilliant way of implying the truth, which is only revealed right at the end. The title also becomes clear, with its beautiful double-meaning.

A lot of reviewers on Amazon complained that the ending was a disappointment. I also felt a bit let down when I first read it, but on examination I think the dissatisfaction was because most readers have, by the end, put themselves into the book. They understand its structure (they think) and they have expectations about Aqib’s character. Wilson turns these expectations on their heads right at the end, and then it becomes clear that the very structure of the book was designed to draw you to that point. Readers are bound to feel a little bereft; whether or not they are prepared to be understanding about it is up to them. The twist is beautifully done, and on second, third, and fourth reading of the end, I’m happy to say I don’t now know why I felt disappointed. It lends a final additional dimension to the tale, one I hadn’t even considered.

I daren’t write any more in case I blab about the twist. It’s bad enough I’ve told you at all, since it was a complete headf*ck for me as I didn’t know there was one.

From reading Amazon reviews, it seems a lot of the subtlety was lost on readers, so if you’re someone who likes everything clearly stated from the outset, this may not be what you’re looking for. On the other hand, if you want to dance a romance with two beautiful, complex people, and live multiple lives in the blink of a few hours, this could be a read for you. A lot of people mentioned the ‘flow’ of the prose and that it errs on the literary side, and sure, it’s beautifully written, but totally accessible, not at all pretentious. These are the characters’ thoughts, not the writer’s. The language they use to describe things reflects their social standing and their feelings. It is another layer of them, and I wouldn’t want to deny them that. It is Aqib’s narrative, after all.