Eleanor: The Unseen by Johnny Worthen is a solid tale. The characters have the depth of real people, so the challenges they face become the reader’s fights, but more than that, the story ambushes you in just a few pages. It’s the kind of book that permeates your mind. 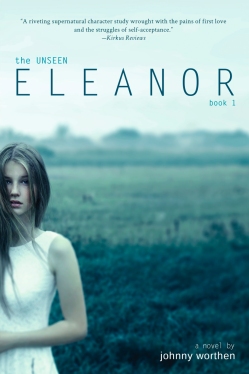 Eleanor: The Unseen is a coming-of-age story. Eleanor heads straight through puberty with embarrassment, jealousy, and love all jostling for space at the front. But there is more ‘coming of age’ content than the familiar hellpits of adolescence. Like every one of us, Eleanor is a unique individual, but she has a rather rare secret, which has up-to-now been safe. Unfortunately, Eleanor’s increasing maturity (think raging hormones plus severe emotional stress) may put a halt to that safety, but in the meantime she copes with the kinds of issues you hope no teenager would ever have to face including serious bullying, death, and ostracism.

Because despite what that ‘In essence’ section says, Eleanor is a book that will haunt its readers. Although it is ultimately identified and named, the book doesn’t try to over-identify the real nature of the creature she is, and you’re left with only your imagination for company. Despite the creature’s realness in the book, there’s an ethereal quality to the Native American folklore that edges this tale. It isn’t a creepy book; far from it, but Eleanor has very animalistic instincts when it comes to survival, and you can almost taste the tension and the heightened sensations in some very stressful situations.

Eleanor: The Unseen is a small explosion of story; the characters are strung together by circumstance, cunning, and storyweave. The tale draws on Native American folklore, small town rumour and appalling situations, and it doesn’t just tug at your heartstrings. It gives that organ a kicking.

If you like weird and amazing stories with a lot of twists and turns, and if you want to feel the emotions that your characters are going through, this is the book for you.

If you don’t like books about supernatural weirdness and you hate reading about kids in American schools, I guess this isn’t for you.

See more of Johnny Worthen at his website. He isn’t just a two-trick pony.

2 thoughts on “BOOK REVIEW: Eleanor: The Unseen by Johnny Worthen”